Attachments are not displayed for some emails

Attachments are not displayed for some emails.

This email has a 3 MB attachment but doesn’t show it anywhere. 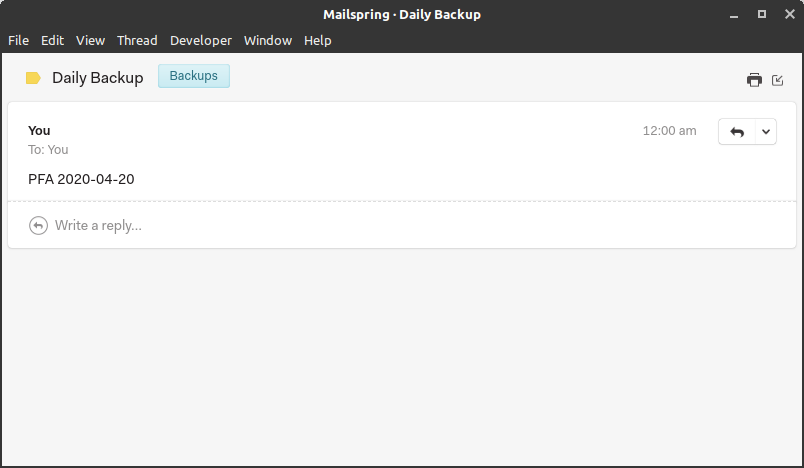 (Originally posted by teejee2008 on GitHub.)

Bug: Attachments are not displayed for some emails

Describe the bug Attachments are not displayed for some emails. To Reproduce Steps to reproduce the behavior: Open any email that has an attachment Email does...

Hey @teejee2008 — thanks for reporting this! I don’t think I’ve seen this happen before. I appreciate you dong a second install on another system, that rules out the app being unable to write to the filesystem to save files, etc.

Could you try opening that email in Mailspring, and then clicking in the whitespace to the left of the Reply button?

There’s a small hidden menu there with an option to “Show Original”. If you click that, it’ll open the RFC2822 message (the raw MIME from your mail server).

Inside there, you should see a structure something like this:

If you could post the general shape you see in your email that’ll help me narrow this down and create a test case to reproduce it. It’d be super helpful if you could send me the entire text of that raw MIME message to ben@foundry376.com, but I understand the backup in this screenshot might be sensitive data so that’s fine!

Ahh one more question—is there any chance this attachment is a plain text file? We recently added support for plaintext message viewing / replying in Mailspring, and it’s possible that the app now thinks the plaintext is a separate “version” of the message body, not an attachment. I haven’t seen that happen, but if this didn’t occur until recently there’s actually a pretty narrow set of things that could cause it.

(Originally posted by bengotow on GitHub.)

I have emailed you the raw data. The raw data shows the attachment in the message.

The attachment is a TAR+XZ archive 3 MB in size. I have other emails with similar attachments that display properly.

(Originally posted by teejee2008 on GitHub.)

Hi, has this thread been resolved? Because I DO HAVE IT HERE!!!

So, we are using the email-notify from Atlassian for bitbucket pipelines, and on those pipelines we are attaching a changes.tgz file with texts inside. I can see the attachments using gmail web interface, but it just doesn’t show on mailspring. The email is sent to a distribution group we have which I can subscribe you guys to, so you see what happens. Important to say:

1 - This group ALLOWS attachments (but only owners can send emails to it)
2 - The attachments ARE displayed in Gmail Web interface
3 - I’ve tested this with multiple emails I have and all of them got the attachment, so, the attachment disappears ONLY in Mailspring
4 - Other users we have in the list use the Apple Mail client and it works just fine for them, they get attachments and all.

So, subscribing you to this group could help you identify the cause of the problem. Please, drop me an email with the email you want to use to test this and I will gladly add you.

Obs: currently we are running the pipelines daily but if someone wants to do a call on google meetings for this I can run it in realtime

Hi Mailspring team!
I’ve faced the same problem – any attachment of CSV format are not displayed in received emails.
“Show original” displays the data as some encrypted text

image759×347 59.9 KB
But there is no way to get a file to be downloaded.
How to overcome the problem? Is there an option/setting to disable this feature for plain text messages?