First of all, congrats to the mailspring team! mailspring is currently my favourite Linux email client after migrating from OS X

The unified inbox view could be “smarter”. I’m migrating away from “Spark” because there is no Linux version and i believe they have a cool approach to this. They separate the unified inbox list into categories such as “Newsletters”, “Pinned”, “New” and “Seen”, etc. I think newsletters isn’t particularly important but the others are quite useful.

At the moment we have “starred” emails that we can access by clicking on the panel in the side. However, we need to remember they are there and even though it works, it isn’t displayed in a “unified” way and doesn’t keep our important emails visible at all times.

It would be cool if we could separate the second column (the email list) to have “New Emails” at the top in its own section, “Pinned Emails” below that ( this would basically be the starred messages ), and then “Seen Emails” under that, using the normal sorting order.

The “Spark” email client does this feature quite well and i have found it intuitive to have my “important” stuff organised and visible at the same time as my normal email list in an easy to understand and unified view.

Here is an example of how Spark’s smart inbox is organised ( as i said, i don’t think newsletters particularly warrants its own group, but here it is as an example ): 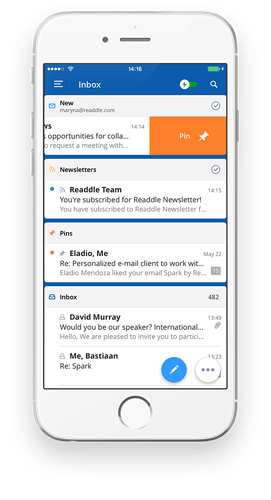 Thanks for your consideration!

I’m another person using Mailspring after migrating from macOS and Spark. Hi!

Mailspring already has Unread and Starred options in the folder list, so we’re maybe 80% of the way there. Having these two available as sort options within the message list would be quite neat, I think, either as discrete areas or as sort options (e.g. sort by ‘Read’ status and then by ‘Starred’ status).

Haha, looks like we’re a hidden demographic in the Linux world!

Thanks for the upvote!