Mailspring takes a lot of time to open in Ubuntu 20.04 LTS

I have been a Mailspring user for a while and I was working with Mailspring in Linux Mint 18.0 for a long time. I had a problem with this system but it was related to the graphical environment (Cinnamon), but because of the sooner unsupported version, I decide to try again Ubuntu with their last LTS version. I have made some test of performance (time tracker) of how much time requires Mailspring to open up for the first time and I am sure that it takes more than the double of time compare with the Linux Mint 18.0 version. Besides Mailspring app does not recognize the theme of my pointer and takes a default (ugly) pointer theme.

I know that those problems are not so heavy compare with some other issues. However, if you can improve the performance for the new Ubuntu LTS version, I believe that you are going to improve a lot of distributions as well.

I am working with the last stable version available in SNAP. I give you also some details about the RAM/CPU performance of my machine, if you want to work in this feature and you need data from my machine, I will help you with whatever you want. 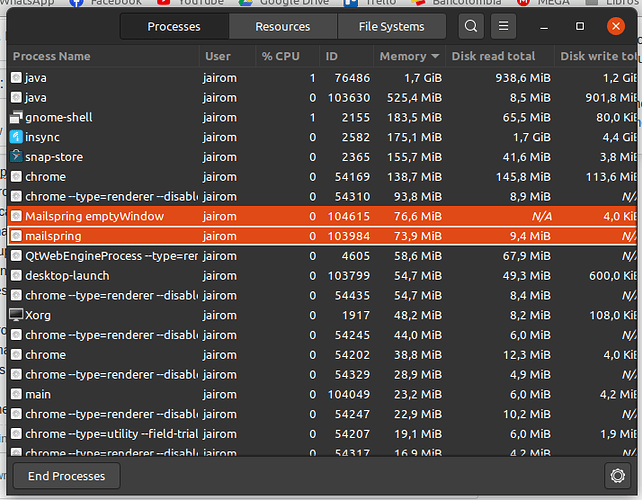 Thanks for your time

(Originally posted by jrmejiaa on GitHub.)

Feature Request: Mailspring takes a lot of time to open in Ubuntu 20.04 LTS

I have been a Mailspring user for a while and I was working with Mailspring in Linux Mint 18.0 for a...

Using lzo compression in the snap instead of xz will probably help this a bunch:

(Originally posted by castrojo on GitHub.)