V1.10 on Windows: better_sqlite3.node is not a valid Win32 application

Same here, Windows 11. Had to kill the process tree to end a failure loop, delete the 1.10 directory and install 1.9.1. Pretty disappointing. Did they test on Windows?

Same here, Windows 11, working fine for at least one month, suddenly get this failure loop, will not get out of it without CTRL+ALT+DEL. Only way was to install 1.9.1. Tried updating that install to 1.10 afterwards, got the failure loop back.

Looking forward to not having to deal with permafail loops.

resolved by deleting the update folder suggested by @tmx976

didn’t need to reset the path of the application as they had.

It definitely appears to be a bad update that wasn’t tested properly. I was having the same issue this morning after the update to v1.10. I was able to follow guidance from @bowihowi4u and manually deleted the v1.10 files & folder (in C:\Users…\AppData\Local\Mailspring) and changed the Mailspring launcher icon to point back to the v1.9.2 folder.

Everything seems to be back to normal now - definitely going to ignore the prompt to install v1.10 update until I see confirmation this issue has been addressed.

This isn’t the first time this has happened…at least to me. This is happening again. I reinstalled the previous version and made sure to get rid of the 1.10 stuff. As soon as I close Mailspring and open it up again, I get this loop.

At this point, I am ready to ditch Mailspring. As much as I love it, I honestly cannot take time out of my day to fix this error every time it comes up.

Me too
After reinstalling the application, I lost all of my settings. but I still get the same error.

Have you tried checking out my post available here?

Hello everyone. As I’ve ran into the issue myself, I also find a better workaround, following @dgiakoum’s advice, so all thank to him. This method will not erase your data, settings, themes, etc… so you’re safe to read this guide. I would also like to mention that the developers of Mailspring are working ASAP on the issue, hopefully a hotfix will arrive soon! Killing Mailspring Instance First of all, it is important to “kill” Mailspring, because it is probably running in the background, as …

I’m sorry, but your settings won’t be recovered if they got deleted.

Mailspring being buggy for a long time.
First White Screen Death.
Then Freeze with a long email thread issue.
Now Installation issue.
Ummm… I don’t know, seems like almost a year I’m facing issues and due to these crucial bugs, I can’t trust my favourite mail client when I need to send or check some email quickly while working.
I was hanging with Mailspring till the new version. I was in hope that these crucial issues will be fixed with the new version. But…
I have started to use our old buddy Thunderbird again since 1st March.
It was a good time with Mailspring. Hope to use it again near future.

Deleting nothing helped. Issue comes back like bad Empire. Have no time to fight with it. Switched to thunderbird.

Same problem here, I killed the process in Task Manager and then deleted the “app-1.10.0” folder. Now it runs the old 1.9.2 and dismissed the update. I already accepted the eternal accounts-disconnected bug.

All my data is there so everyone should try this fix. 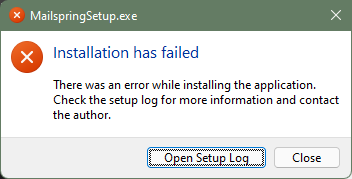 After several attempts on reinstalling/uninstalling/using revouninstaller to clean all traces … now I cannot pass the second error message and installation is unsuccessful.

Any tips or ideas? Maybe I’ll just keep trying until it works …

I canceled my subscription.

I found that the app auto updates to the latest version on a computer reboot. I tried using the previous version to escape this issue but the auto update screw everything.
They have to remove this messy update from their servers completely.

It’s not really an update they host on their own servers, it’s controlled by GitHub, which is where the code is and where the updates are shipped from. Deleting an update is not really great to me, in top of that, maybe Mailspring will update itself even if deleted…

The app is retrieving the update from a remote server. If you take it down, it cannot update itself

Thanks, I was very happy to read that. I can confirm that version 1.10.1 also fixes the problem for me (and most likely, everybody).

I simply rebooted my computer and when Mailspring attempted to start up, I got the error again. Reverting to a previous version doesnt matter either. I get the same issue. Over it. Ill check back from time to time, but Im moving to something else for the time being.

Well I see theres an update. Installed. So far so good. Lets see how long this holds. Thanks @TomMann